This day was clearly my last and there was no way to avoid it. I was thirty-ish miles from home in territory I knew well by car.

I was not thrilled by the scenery. Usually I am when I am coming for the weekend from home but after what I’d been through, Marin paled greatly by comparison. Still I did take this shot between Spirit Rock Meditation Center and Fairfax 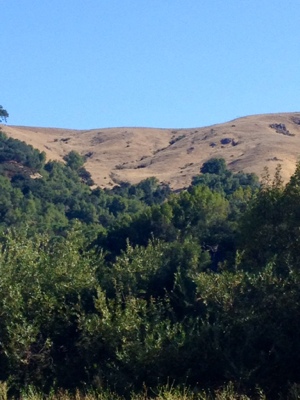 Sir Frances Drake is maybe the worst ever road to ride and people have created well marked bike routes along parallel roads but each time I do this, I get lost. I wish mapquest had a bike option. Even when you choose the pedestrian option, they’ve got you walking in the highways.

Rather than look at maps or go to any of the dozen (no kidding) bike shops catering to rich guys in tight colorful clothes, I asked people for directions.
I asked this one lady riding on the road with a dog in her basket, if I was going the right way to Sausalito and she said I was going the right way but I was on the wrong road.
As I am at the intersection to turn to what I figure might be the right road I get a yell “Hey! hello” from a guy at the camp last night. He’s continuing straight on the road I am turning from. What was I doing listening to a lady with a dog in a basket anyhow?
Even though at this point I can tell its the wrong road I continue because its going to the Larkspur Ferry.

This is what is on the side of the road here. House after house on the water, most with boats parked in front.

There was another woman with a bike. I got up next to her and we started chatting. Her name was Sally! It always makes me happy to meet a Sally as that was my sister’s name. This Sally had lead bike tours in Europe and we had a lot in common and enjoyed our half hour ride together on the ferry. She was very cool and felt like a soul sister and I will try to see her again. Even though she was late to work, she watched my bike for me when I went to the restroom which took a long time as there was a huge line.

From there I went to BART and had to keep riding up Market Street until 5th before I could find an elevator that worked. The trains were not crowded and the commute was easy. Even the big hill up to my house with all my gear was easy.

As soon as I was home, my teenage kids and I were out and about. The whole world I live in here seemed shocking. It felt like all of it was just EXTRA, meaning it is stuff you really didn’t need or need to be concerned with. Extra feels like it covers up and distracts from what’s essential and everyone is running around in it being very hurried in a way too over stimulating environment.

I’ll try to keep the trees in sight. They will remind me. Until I get swallowed up by all this again. Until I can leave again.