This is Josh dropping me off at my campground. 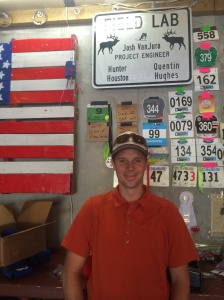 This is Josh Van Jura in his garage in front of all his bike race numbers.

My new bike is not my old bike Silver. Her brakes are in a different place and this place I am very used too so my instinctual reach is wrong each time. Im working on that. Ditto for gear changes.

Woke up a bit scared for todays climb. Up at 6 and at breakfast at 7. Couldn’t eat it all so I wrapped up half of it in a napkin which I forgot after filling up water bottles in the bathroom. I left the extra food for later there. Its an hour later here and I just don’t eat breakfast that early and I guess I’m not even awake yet.

I am out of the bay area which means the coffee is weak and there are more dry cleaners than tattoo parlors. There were even dry cleaner drive throughs in salt lake city. I have never seen so many dry cleaners.

In San francisco if you are the guy wearing the suit and tie you’re not the guy making the money. Now the Guy in the jeans with the tech T-shirt that’s the guy making money.

Starting out after a few miles I realized i didnt have my bike shorts on! as I never wear them at home so I stopped at the Port-of-Entry station where big semis stop. 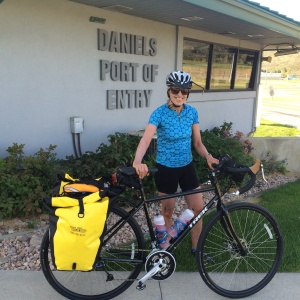 Guy there was nice. Says he sees all kinds of people like me doing this. To me thats encouraging. He says he knows I will make it and promises to follow blog. That helps. Ah, the kindness of strangers.

I talk to flowers at the side of the road and animals. 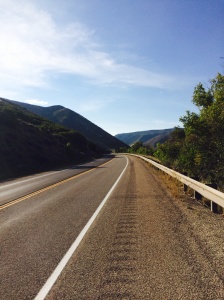 At The restaurant at the top of the summit has glass lamps with copper cut outs! incredible right?