There is not so much to say about this part of the ride except that it was beautiful.

Here is what a difference water can make: irrigated land. 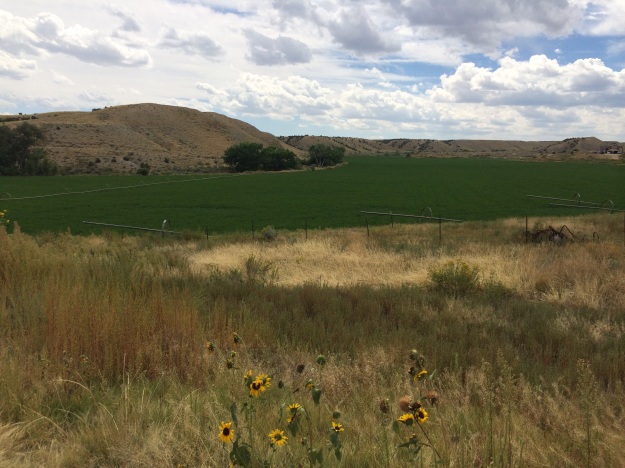 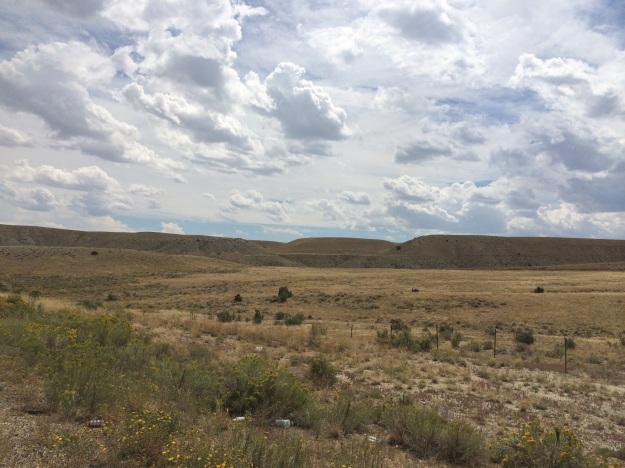 Because I knew I would reach my destination early I started to take lots of breaks and pictures of the road.

I especially like pictures of the roads intersecting  highway 40 going off into who knows what. 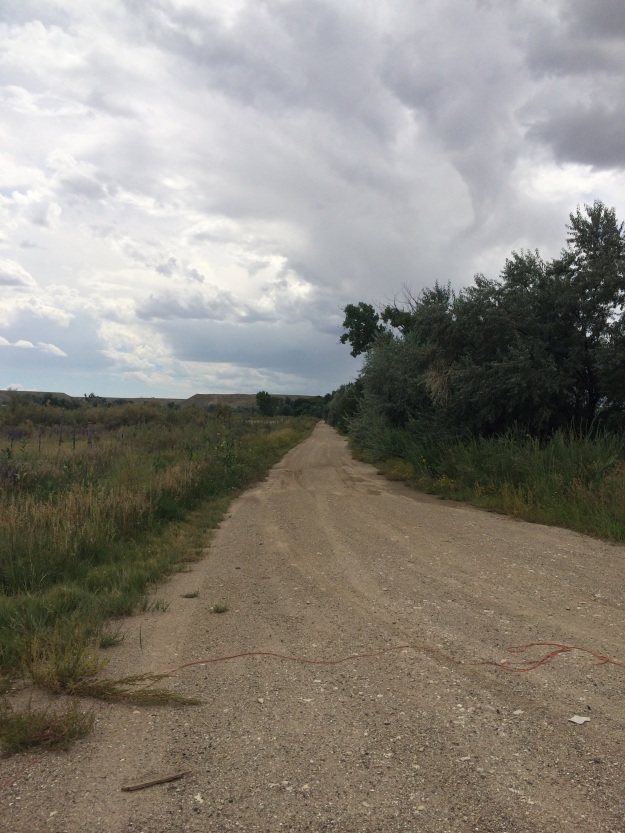 Nearing the end of the 50 some miles I stopped for a salt break because I could tell I needed  salt from so much sweating. As I was eating a pack of salted peanuts an old man in a sporty red car stopped on the other side of the road.

I had just taken a picture of this road. 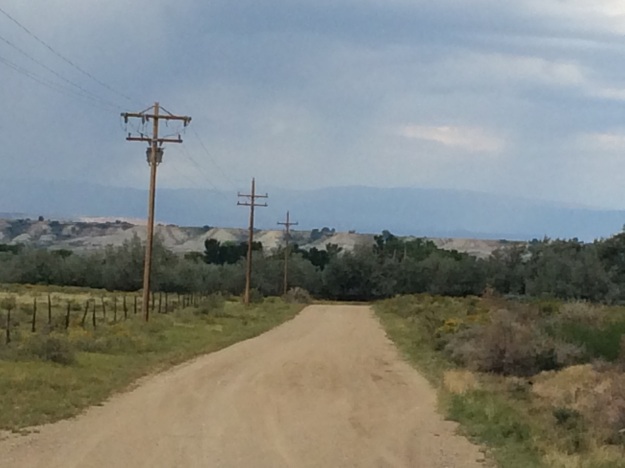 He asked, “are you giving up for the day? ”  I said, “no just refueling, I’m needing to eat something”. So he says, “why don’t you come home to dinner?”

I thank him for the offer and tell him I have friends to meet in Roosevelt so he says, “OK “. And then his red car shoots down the road I have just photographed and my greasy salty hands can’t get the phone out quick enough to catch that.

But I caught another car I liked.

About ten miles out of Roosevelt, it starts to get very very windy. The big sky is getting darker and darker. I take off my sunglasses but I have to put them back on again because the wind is blowing all this stuff in my face and eyes.

Tumbleweeds are tumbling across the road and the whole 9 yards. The wind gathers a lot of momentum when it’s running across those vast expanses of beauty and hitting me hard from the side so I had to bicycle a certain speed or else it would knock me over. It was that strong.

I haven’t written much about the wind because the wind is either behind me or it’s in my face and it seems to be equally both so I’m not writing about it but this was different.

When an 18 wheeler passes me and scores of them have passed me on hwy 40, you feel a little gust of wind. It’s almost like a push from behind because you’re going in the same direction and that’s fun but this wind was hitting me broadside.

It was about to pour rain and at first that seem like a good thing because it would be like an early shower until I remembered all of the trees by the road I’ve hit seen that have been hit by lightning.

I haven’t taken pictures of them because they’re not pretty but I’ll try to get a picture of one so you can see what it looks like.

Most of the fires in Utah are started by lightning. I pedalled hard to reach Roosevelt.

And I made it in time.

I booked into a luxury hotel for under hundred dollars and it is marvelous! I have a room across from the swimming pool and the hot tub. I even have a bathtub in my room and a large flat screen TV which I haven’t turned on.

After I took my shower and washed my clothes in the sink I went to the grocery store and got my food for dinner tonight and breakfast tomorrow.

The next town is 28 miles out tomorrow morning so I’m going to try to get a really good night sleep in this really big bed. My destination tomorrow, Dinosaur Colorado, is 64 miles away which is a bit intimidating.

6 thoughts on “SLC to Denver.Day2/Afternoon: Duchesne to Roosevelt”