I wake up in Dinosaur and the first thing to say at loud to myself is I’ve never felt so lonely. My immune system is down because I haven’t gotten any sleep. 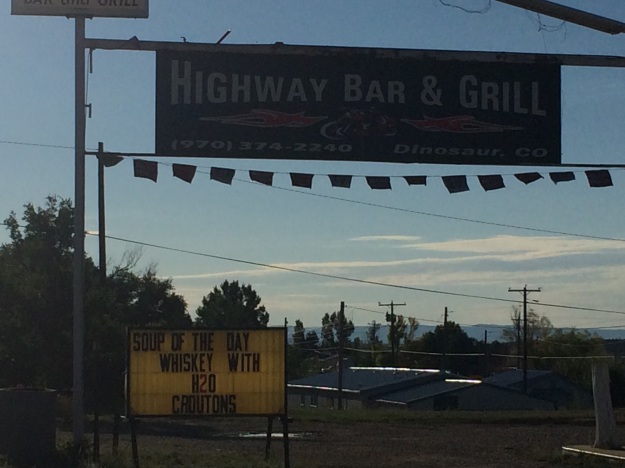 But the people were great (except for the ice cream lady ). the two guys that clean the restroom and shower were great and I’ve never seen a cleaner shower or restroom; nothing but the basics no mirror or anything but still it was clean and those guys were really friendly.

Here’s the floor.  I love floors like this. I grew up with the bathroom floor like this. Since I’m a patternmaker I love to look at patterns I can’t figure out … especially when there’s no pattern

After I get done whimpering I pop out of my tent and I find on top of my clothes, which I left on the picnic table, is a note a pen and a large bag of gummy bears.

The note turns out to be from a fellow named Jim and it’s very encouraging it explains that he saw me arrive last night and that he also is a fellow traveler and is here for the hang gliding competition.

He leaves his number and tells me to call him and that he is just in the house 80 feet away and he gets up at six. What he means by “the house” is one of the hotel bungalows that has gone out of business a long time ago here’s what they look like from the picnic table.

It’s a super nice note; I especially liked the line where he told me ” your manifestation is amazing”. I write him back a note and explain that I am on a schedule and can’t hang out and left him my two glasses of wine and told him to imagine and that I was drinking one of them.

I took the gummy bears even though I have never eaten gummy bears nor have I ever wanted to but I didn’t want to be rude and leave them.

After strong coffee in the gas station I head out for the next ride which was 57 miles to Maybelle with nothing in between nothing at all except beauty, space and sky. 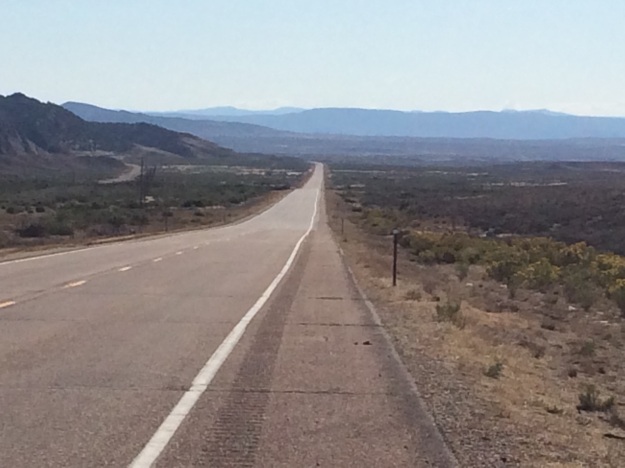 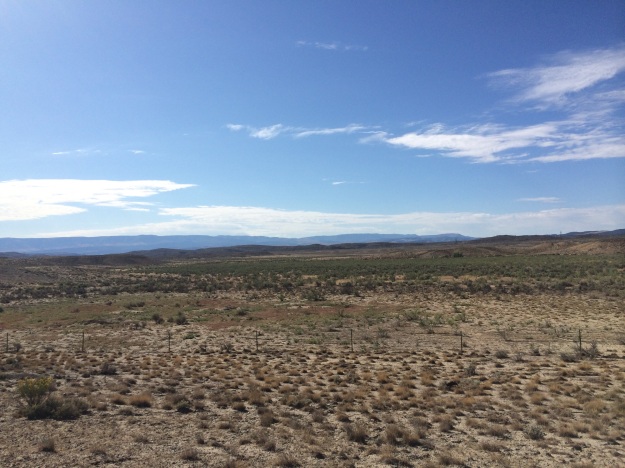 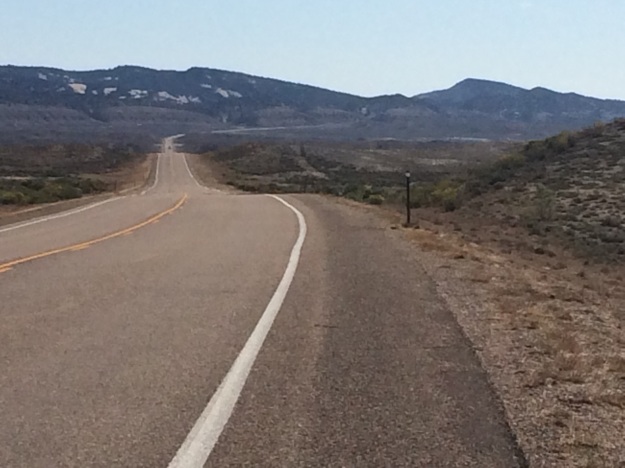 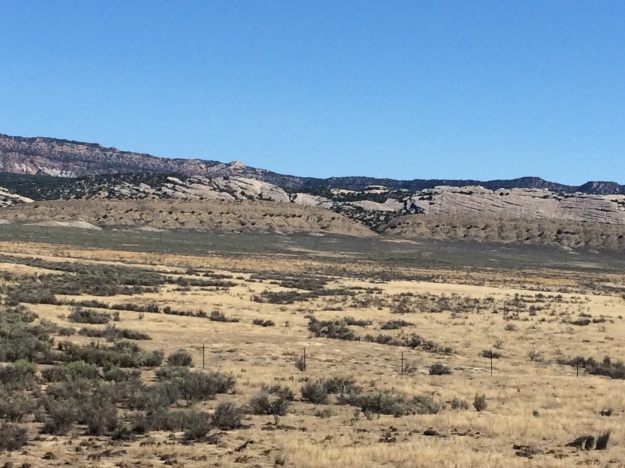 The ride was hard in two ways: number one, there were a lot of hills a lot of long hills  going up up up: gradual but tiring. I am riding always under the sun all the way not a tree ever, not one, has been on the road giving shade. It is not so bad as I am riding in early September and at high elevation so it is not terribly hot.

Even though I am riding on the Colorado Plateau these hills do have down hills so that’s pleasant and I can get roaring up to 44 miles an hour. (Inspired by Lily Moriarty at 14 karats, the jewelry store on college ave. who does that speed going downhill). 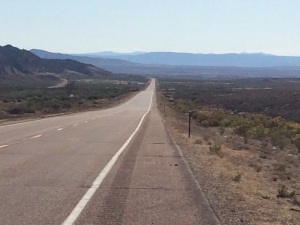 Once, when I was doing that, there was a black line on the road and it was coming up too fast and I thought to myself if that black line is three-dimensional I’m done for and if its two-dimensional I’m fine and of course It turned out to be fine or I wouldn’t be writing this. 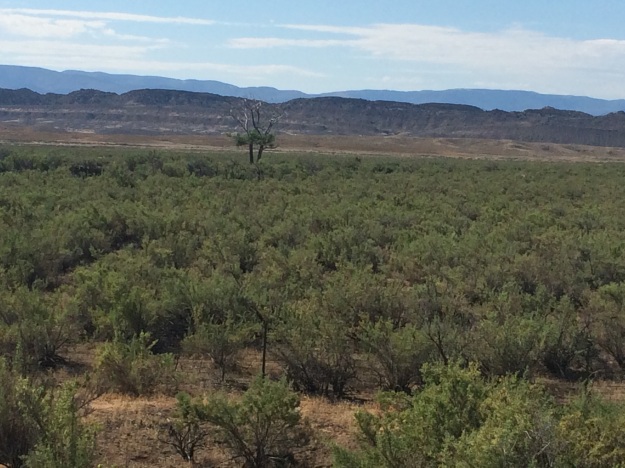 You really realize how bad sugar is for you when you’re doing something like this. At one point I even threw an Apple away after eating two bites of it because I just couldn’t stand the sugar. What I needed was protein.

It’s infuriating when you look at the map and there’s a dot that says BlueMountain and there’s another dot that says Oak Springs and you think these places are towns but they’re not. They are just signs. Later I realized that perhaps there’s a coal mine nearby and that’s why they on the map because otherwise I don’t know why they’re on the map. 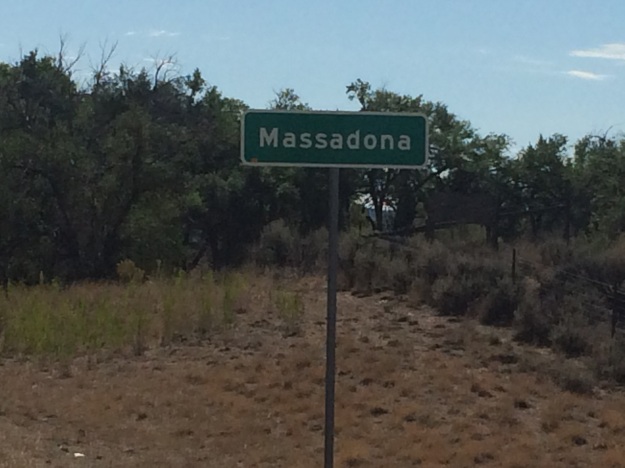 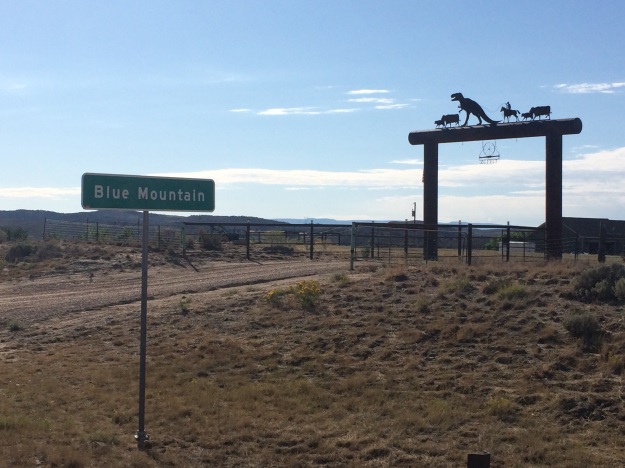 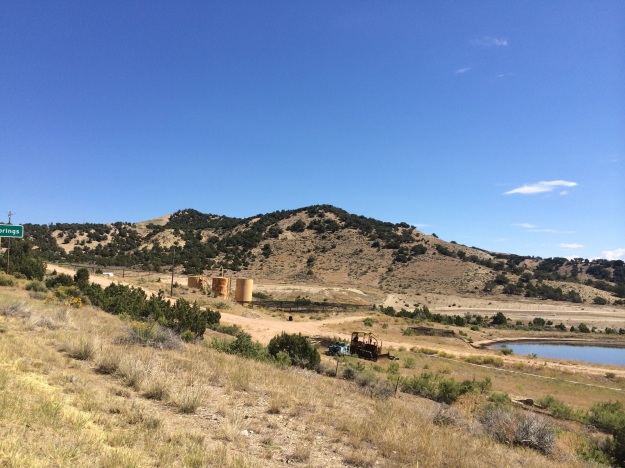 At some point along the ride I see a sign that says rest stop 1 mile and I wonder to myself what could I use at a rest stop. I don’t want anything from a vending machine and I don’t need a bathroom because I can go to the bathroom anywhere. And then I think “Shade!… a rest stop is going to have shade!” so I go the rest stop.

And there I meet another guy name Jim. This Jim is not a vagabond. This Jim is extremely wealthy with homes in Washington DC, Colorado and Costa Rica.

We talk a lot about Washington DC and have a lot in common there. His eyes are as blue as his turquoise shirt as is the sky as are his fancy glasses.

He is having an adventure in his car with his well bred poodle driving around the vastness. He’s a super nice guy and I’m very glad to have met him but I am also noticing that the wind is strongly in my direction and I want the benefit of that over these many hills that I mentioned earlier. 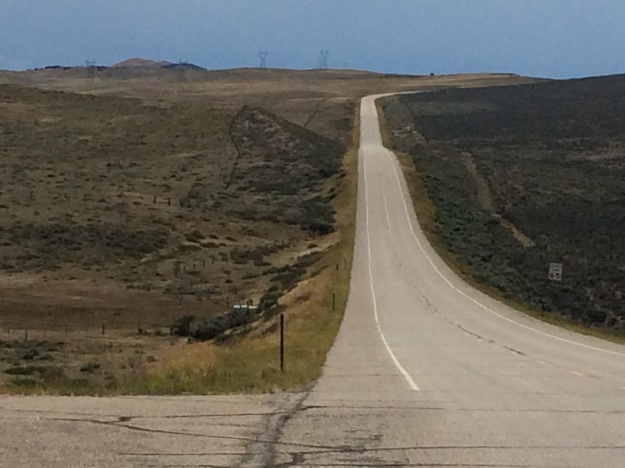 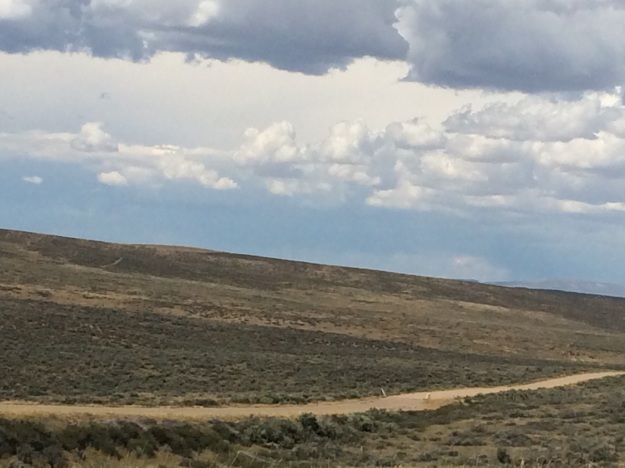 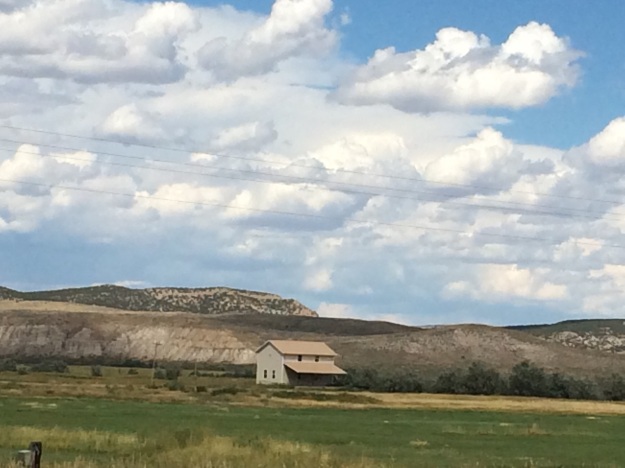 As I am climbing gradually these hills I am wondering how the hell I am ever going to get over a rabbit ears pass if I am in lower gears on these hills because these hills are not even having passing lanes .

Finally I get to Maybell and I am thrilled when the lady in the café says, “You came all the way from Dinosaur? Wow, you’ve gone over a whole lotta big  hills!”

She tells me that there are a few climbs around Craig Colorado but really it’s mostly flat to Steamboat Springs. I am glad to hear this.

Maybelle doesn’t have much. It has a hotel, café and a gas station and the church. Here’s the sign by church. I react to this like the “Freedom” signs that I try to figure it out. The money part I get. But the rest of it? Tell the truth and someone will give you a break? 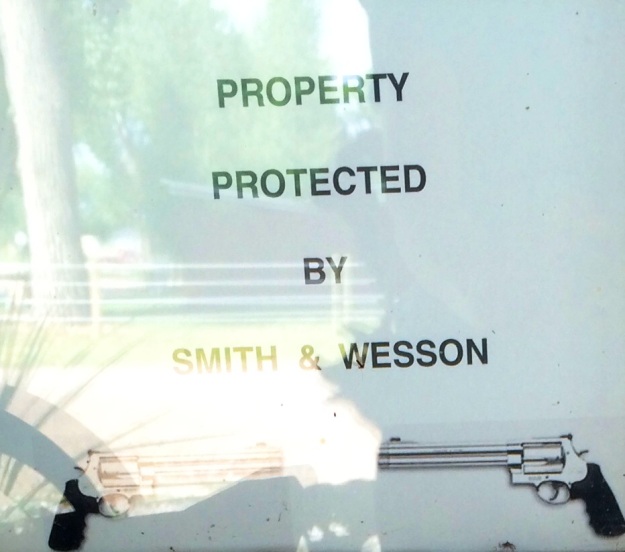 The bed there was as comfortable as mine there was no TV but there were lots of books and the Internet sucked so I couldn’t blog from there and I couldn’t plug from the dinosaur Townpark so that’s why I got behind in blogging. 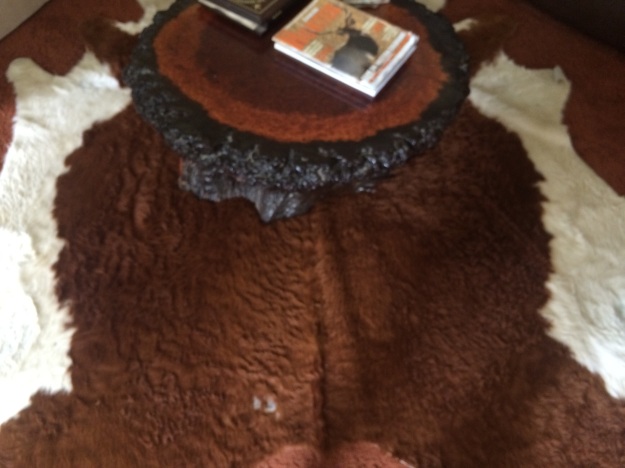 I was their only guest that night. When it’s hunting season, its packed.

2 thoughts on “SLC to Denver.Day 4: Dinosaur Colorado to Maybell Colorado: 64 miles of nothing but land”