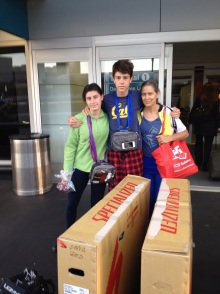 This is us at 5:30 in the morning. Jon took this photo after dropping us off at San Francisco Airport.
We flew to Portland and then took a tiny plane to Eugene.
In Eugene airport we put together our bikes. Which took hours. They were more taken apart to fit in the boxes than we expected. Brett at Mikes Bikes in Berkeley was fantastic in helping us over the phone. Noah’s disk brake retailer was completely detached from the bike and the chain was all twisted up. We took photos of it and sent the photos to Brett’s iPhone in the Berkeley bike shop. He recreated the situation and then sent us a video of him fixing it!!! It was mostly Sa and her physics who did this. Noah and his noticing skill figured out that the fork had been turned around and bit by bit we put the bikes back together
We left the airport and biked the wrong way 5 miles but it was so incredibly beautiful it hardly mattered. We were so happy just to be on our bikes and riding.
After about an hour we biked into Eugene and had a fantastic guy at a bike shop go over the bikes and fine tune everything for practically nothing. After that, we had dinner and went to sleep in an over priced two star hotel with a bathtub.