Noah, in his persistence to go home, figured out that we were close to Boise Idaho and that it had an airport. 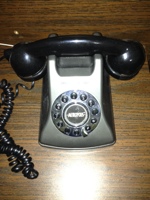 We found a flight for $80 from Boise to Oakland, so we booked it and went to sleep after buying state maps from a truck stop.
In the middle of the night it started to rain so I jumped out of the tent and put the fly cover thing on and got the bikes and all the packs and shoes under shelter and I was hard to wake up in the morning especially as it was still raining.
We had sent back a lot of stuff from the post office in Baker City to make us lighter on the hard climbs. Noah’s rain jacket was sent as he was only riding 2 more days and as Sa had checked the average rainfall and it didn’t seem we needed it. So I set out in the rain primarily to get a good cup of coffee and also to get a rain poncho (which unfortunately will act as a sail) for Noah. There was no place open to get him a rain jacket. 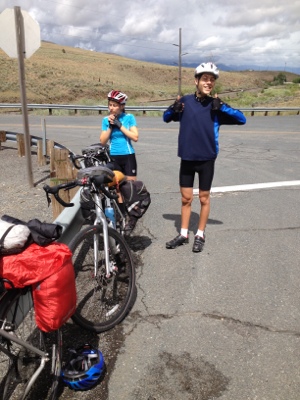 It took us a while to figure out a route. We didn’t want to do any interstate but we couldn’t make it to boise in time without it. So we finally started out around eleven on a course that involved ten miles of interstate in a seventy plus mile day.
The ride in general was easy as there were no mountains and we were on a frontage road with hardly any traffic and beautiful scenery which I am shooting with the phone from the bike. 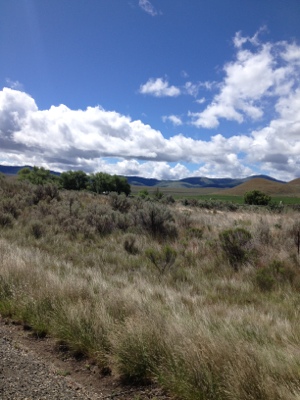 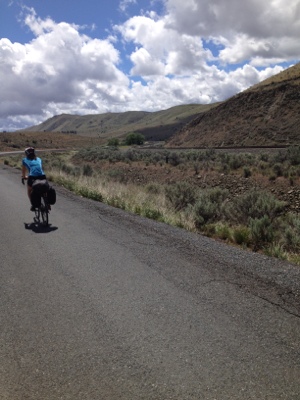 We were scared to get on the interstate so we all wore yellow and had our flashing red rear lights on and took Bach’s “Rescue Remedy” drops but it wasn’t dangerous at all as the shoulder was huge. However it was unpleasant as the 18 wheelers were noisy.
Just as we were getting used to the interstate, Sarita had a flat!!

We fixed it easily!!

We carried on and Sa got a wasp caught in her shirt and it stung her several times!!! 😦 But she (as usual) was a hero! We contined on (on and on and on) miles upon miles and through a time change and into another state! 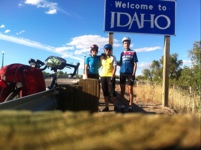 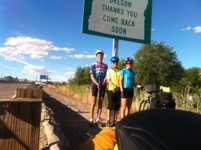