The day started out a bit slow with a flat tire from my wipe out the day before which we fixed easily. As I was locking my bike against the post, to get my morning cup of coffee, an entire bus load of teenagers on a Christian field trip went into the coffee shop before me. “Oh my fucking God” I say under my breath and then a hand places itself on my shoulder. I turn around and a male twenty-something counselor type says, “Don’t worry, you can go ahead of us”. Thankfully, I do. The sign on the tip jar says, “If you tip, less children will have mullet haircuts”. I liked that.
Sa and I set out completely clueless because we no longer have our “Adventure Cycling” elevation maps. Hwy 20, the same small road we were on in Oregon, was a straight red line on our map and it looked flat but it wasn’t. It just went up and up and up out of Mountain Home. Around each turn, we thought it would start to go down but it never did, for twenty five miles! There was a quick mile of down named “Devil’s Dip” but it only lasted one mile. Eventually, the climb did stop and 44 miles later we made it to Hill City where there was a building which was open and had a bathroom Yea! We got water!
You had to go through the saloon (which is often behind the store out here in these parts) to get to the bathroom. About six people of various ages were hanging out and talking and eating lunch. Seemed like they all enjoyed each other and that the saloon was more about being together than drinking. 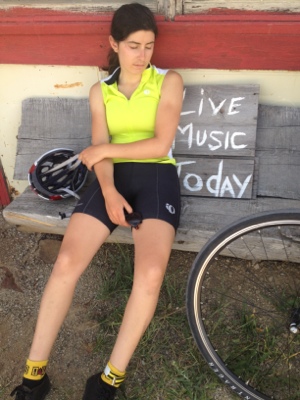 We bought an electrolyte drink from a young hip lady in skinny jeans from Britian. Like the Indian family you can’t help but wonder what brought them to the middle of nowhere.
We drank our drink outside on the bench and one of the old men in the saloon came out and he talked with us a while. He explained he was running for office and gave us each a wooden nickel. The other side said, “What’s freedom worth?” and had his name and campaign website. He was real nice and drove off in an old beat up white pick up truck.
It’s hard desert like land out here. Even if you are wearing shorts, on your feet you have cowboy boots.

We rode on and made it to Fairfield where we camped for free in the city park. That city has the best water from public water fountains I’ve ever tasted.
We meet two kids who explained to us that winter had just ended and that it was spring and not summer yet which was why they had such good water. This didn’t make much sense but I believed them anyhow. They were very welcoming and happy.
After we set up our tent we met two nice young ladies walking with a stroller who showed us there was an owl above our tent.
He is very well camouflaged and in the middle of this picture. 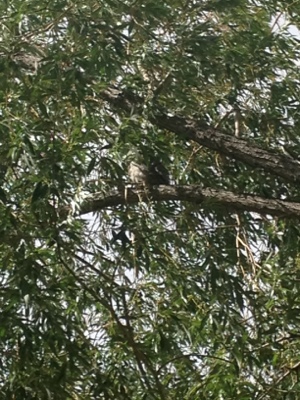