Everyone warned us that there was a huge climb over a pass out of Lava Springs so we got out (somewhat reluctantly) right after breakfast.
The climb was twelve miles of up but since it was early, the sun wasn’t merciless and we made it up just fine.

After that it was 2.5 miles of 5% grade down (just like the yellow-orange sign said) and for me, that’s the scary part. Over and into the shoulder of the road at that downhill speed can really do you some damage. The climbs can be brutal but no chance you’re going to hurt yourself on one.
Anyhow I break a lot in the downhill, Sarita flies and no one gets hurt.
It’s always amazing to me how the landscape on the other side of the pass always looks completely different.

A little more than twenty miles puts us in Soda Springs where we make our usual grocery store stop. Or not so usual.

I love that all of these were over the pet food aisle.

After the grocery store we went to the geyser which is carbonated naturally. In the early 1900s people were drilling for warm water and tapped into this majorly explosive source. They could not use the water for anything as it was so heavily laden with minerals. The geyser was so powerful that soon after its discovery the Secretary of the Interior (US Gov’t) contacted the city of Soda Springs because their geyser was upsetting the schedule of “Old Faithful” which was world famous. Therefore Soda’s geyser is now artificially regulated and goes off every hour on the hour.
We were there for it.

We knew what we were there for and we even had a watch but I was shocked almost to the point of screaming when the thing went off. It was so powerful and 70 feet high!

There was a 4th of July Fair going on and we bought a homemade chocolate chip cookie bigger than a salad plate and a paperback novel for only a dollar. We passed on the quilt raffle and continued our way under the now hot sun of 6,000 feet plus. 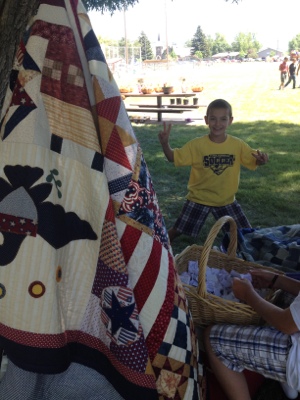 We rode on another thirty miles with no shade so we stopped by a tree on someone’s yard and ate the peanut butter and jelly sandwiches we had made at our Lava Springs all-to-can-eat buffet breakfast.
We did another surprise summit before the town of Georgetown, Idaho. I don’t know why the photo is so hazy. Perhaps the heat?

We were very tired by then and hoping for some cool drink in Georgetown even though it only had a population of 200.
We came upon this building there that had “EAT” in big letters on it’s roof but when we got closer, it was closed and for sale. This happens to us several times a day.

Finally we made it to Montpelier and there was nothing there either even though it’s name on the map was in bigger print as the town’s huge population was 2,100.

We couldn’t find the KOA so we called. It was 2 miles off the highway and I called to ask if there was any food there and the lady said there was food, like breakfast burritos and pizza. She made it sound like food. We went the 2 miles and found the KOA and the “food” was packages (of chemicals) in the freezer box ready to be microwaved.
We rode back to the grocery store and got food. As it was 4th of July and there were red white and blue decorations everywhere.
There are always lots of flags around these parts and usually a black MIA/POW flag flying with them. There are also many yellow ribbons tied on trees. If there are no trees, then the ribbons are tied on posts. 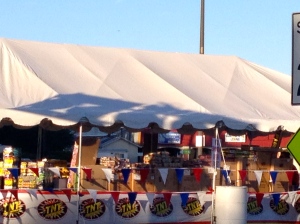 The police were out in force in Montpelier giving tickets to drivers for precious little. When we were biking back from the grocery store we saw them pull over the people in the tent site next to ours.
For the last two weeks we have seen countless fireworks shacks on street corners but now that the 4th is here there’s a $500 fine for setting them off as the unusually high temperatures and winds are making fires that are demolishing homes.
Sarita and I did our clothes in the laundry as usual. To save time, we changed quickly in the laundry room as everyone else was at the campground 4th’s activity. We locked the door as we did this and then went back to the site. It happened then that Sarita couldn’t find her cell phone so we went back to the laundry room to find it but we had locked it shut. We went back to the office to tell the lady who didn’t know what food was that we had locked the door by mistake and even confessed that it had happened as we were changing. She advised that we should never do that as there is a surveillance camera in the laundry whose images are shown in the office!
Why have a surveillance camera in a small room with two washers and two dryers and one sink?
In the bathroom there was 24/7 CNN news program on a screen in the wall!
It was a weird KOA that had a sign at the entrance (pretty much in the middle of nowhere) that said, “No public restrooms” as if you couldn’t “go” anywhere around there. I was looking forward to getting out of there.
We went to sleep in the tent listening to private fireworks.