We woke up to light rain and that was a huge relief. The mega heat wave at this altitude was really taking it out of me. If I never see another “Power Bar” that will be alright for me. On the road like this, you have to resort to them to keep going.
We had a wonderful first ten miles into Paris Idaho.

We ate breakfast at the Paris Grill. The place was mostly empty and we talked with our waitress for quite a while. She explained life in small towns here to us. Basically, everyone is related to everyone. At her annual family reunion, there are literally hundreds of people. Her father was one of thirteen kids. There were 16 kids in her graduating class and most of them were related.
Perhaps this explains the large faded billboard in town which declares “Get the US out of the United Nations now! – John Birch Society”
Maybe we can blame this mentality on the fact that they haven’t discovered dating outside the family yet?
Most of the people here can trace their families back to the founders! The people came and they stayed. We see covered wagon remains everywhere proudly displayed in front yards. We are traveling on the Oregon/California Trail. I can’t begin to imagine how difficult it must have been for these people. They had to drill for water and had lots and lots of jugs (not plastic) of water all along the sides of the wagons. I’m talking now about the wagons being pulled by two oxen. Some families pushed their own carts and the folks that made it, did so by eating each other. 😦

Our waitress was just out of high school and shared with us the dress code here in public school. Shorts must end below the knee (like capris) skirts must reach the knee and shirts may reveal no more than four fingers below the collar bone. In the picture she took of me and Sa in her cafe, my shirt is zipped down too far. For this I would be sent home from school.

From Paris, we had our pleasantest day yet as the turf was flat and small towns with something open every ten miles.

We stopped at a small store which sold semi antiques and we got six mechanical pencils that work from the 1940s! They are so cool. The store was in the original jailhouse from 1888. (that’s the silly jailhouse picture).
.

Riding was a peice of cake as by then the rain had stopped and it was blessedly overcast.

The above picture is a tabernacle built in 1888 (completely put of place if you ask me) by the Mormons or the Church of Jesus and the Latter Day Saints (can’t tell between the two even though the difference has been explained to me.)
Either way, both groups eat “fry sauce” which is put on everything fried, which is everything. It is a mixture of mayonnaise and ketchup. Saves time I guess to have it pre-mixed.
The reason why there were so many active towns on the ride today is because we were riding beside the beautiful Bear Lake and it’s turquoise water.
Along the side of that lake we changed states.

Thirty miles put us in Garden City where we stopped for a Mexican lunch ($10 covered both of us) as it was starting to rain more. We researched hotels as thunderstorms were predicted and we didn’t want to set up the tent in that. One thing money will buy is shelter from the storm, provided there is a hotel, which there wasn’t in Laketown the south end of the lake where we were going to camp. Researching in the Mexican place on the iPhone we found a family hotel thirty more miles away. When we first called them, they said it was fifty miles away. I was talking to one woman on the phone who was conferring with another woman and a man in the background who she was ignoring.
On Mapquest it said their hotel was thirty mules away so we went for it. By then it was pouring which I preferred to the sweltering heat and sun but Sa didn’t.
We found out that what the man was saying in the background was that there is a mountain between their town of Randolph and the mexican restaurant town, Garden City.
The climb was so hard that it was the only mountain where I considered walking my bike. Locals say they think the summit is 10,000 ( from the 6,500 at the lake). There was NO SIGN! At the summit so I can’t say if they are right but it was the most never ending climb we did. (Again I say, thank god in the rain).
It went up and up and up at a pretty intense slope. What you do in that situation as a bicycle rider is, you don’t look ahead because it is too overwhelming and discouraging. You just look at the ground and do one spin at a time over and over and over again. 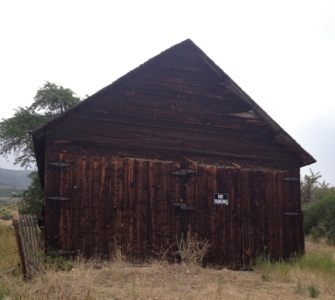 After a lot of this, around each turn I was hoping for the descent. That’s when the run away truck ramp on the other side appeared and I knew I was way far from the top. There was so much rain and so much sweat I couldn’t distinguish between the two.
I started to think of every person I had ever hated and why. I wondered about the possible catharsis or transformation that might occur from something like this self induced trial. I remembered the science experiment Sarita did in 3rd grade. We tried to lift a person who was thinking negative thoughts (photographed it) and then tried to lift the same person when they were thinking positive thoughts. When you are on a bike ten hours a day there’s a lot to manage in your mind.
Miracle upon miracles we finally made it to the top (and there was no sign).
For a while, unusually, we stayed on the top. It was like a plateau and we could see for miles and miles. Like the “Birds” song: miles and miles and miles and miles and miles.
We are not masochists. The thrill of the top is incredible. The experience of riding through wilderness without homes or electrical wires or anything but land and sky is beyond words which is why I haven’t tried to describe it yet.
The overwhelming beauty of an endless horizon in truly majestic land is so breathtakingly overwhelming it’s like one ceases to be themselves but just dissolves like a dot of nothingness in the great expanse of supreme nature. The essence of life is so glaringly obvious and simple next to all our complicated personality fabrications. One is just whole heartly grateful to be part of it all. So much of the day during this trip we are surrounded by nothing and that is the juice. Like a sign we saw “sell the sizzle, not the steak”: it’s about the experience of being IN all these out-of-the-way places; so much so that the summits are just things to get over.
I will say however that when we are in a hotel room and see an ad for the Olympics we completely identify. Not that we are great athletes or anything but that we are giving it our all, our 100% and that’s a wonderful feeling.
Anyway, we soon left the top and had a gradual descent into Randolph pictured here. 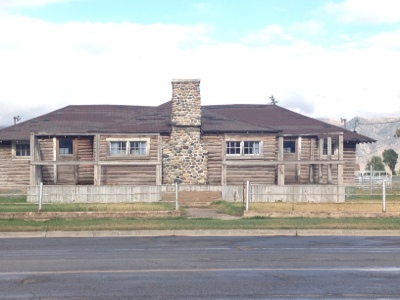 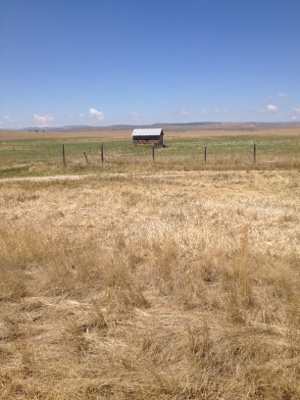 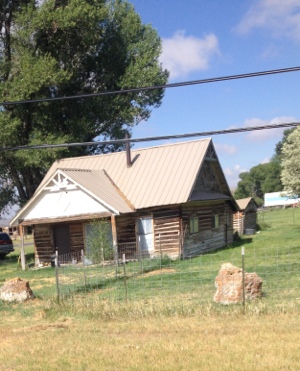 The hotel turned out to be four cabins behind a drive through burger joint where we had grilled cheese sandwiches for dinner after our sixty mile day. Here is a picture of the cabins. Ours was the second one. The green plastic furniture was bolted to the deck.