We set off from Randolph about ten with only thirty five miles to go to Evanston where we were to meet Kaline and her son Santi who were going to take Sa home with them. 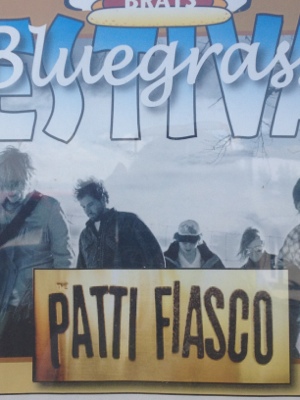 We stopped at a small “country store” as they are called here. They are as close as you can come to a grocery store and we bought yogurts and bananas for breakfast.
We weren’t going fishing but I couldn’t help but to photograph the worms for sale in the fridg as I’d seen it a lot.

In the back rooms of these country stores are hairdressers. Ladies come from as far as fifty miles away to have their hair done.
Around here, gun control means using both hands and men enjoy having lawn mower races and kids have names like “Gunner” and “Pixie”.
While eating outside in the shadow of a country store we saw a black bear go by in the back of a blue pick up truck!

We crossed over into Wyoming…. 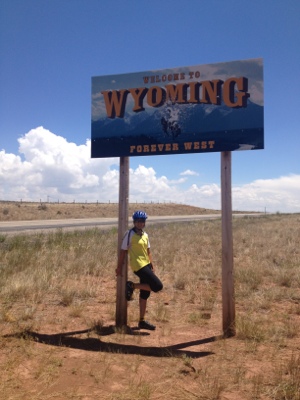 and made it to Evanston still early in the day. 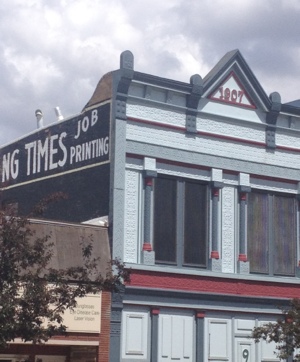 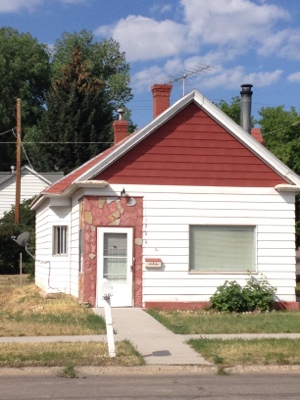 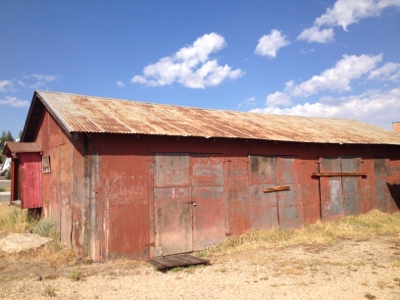 Here’s where it starts getting sad. This day is the last day of the long ride which totaled 985 miles which is almost a third of the country but not the entire thing.
When I was 21, quite a while ago, I bicycled from San Francisco to Washington, DC. I have done this once and have no great need to prove myself. Maybe any proving to myself I had to do, I’ve done from Oregon to Wyoming. I feel younger and more capable than ever physically and very cleared out mentally.
The highest part of the trip clearly was doing it with Sarita (and Noah when he was with us.) We were more like comrades on an adventure that constantly needed readjusting rather than a parent with children.
I want to continue but really there is no point in doing it alone, especially not with the unusually high temperatures and wind and fires.
The last couple nights I have been open to dreams for guidance and twice I dreamt about yoga and once I dreamt about putting an engine on a bike.
As if that wasn’t enough we met firefighters at breakfast. They were huge and rough. They were recruited from the west coast of Oregon to fight the fires in Colorado and Wyoming. Their descriptions of these situations was brutal. We met firman at lunch as well. They were helicopter fireman and said that firemen were being recruited from all over the country to fight these western flames. I can’t see riding through all that around me alone. In the morning, the firefighters short circuited the electricity by using the microwave, toaster and waffle iron all simultaneously. I thought that was kind of funny.
So with a saddened grateful and accepting heart, Sa and I went to the thrift store and got new old overalls and changed into them.
This is us in the dressing room (no camera here but ours). 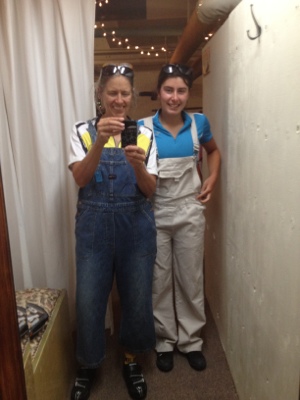 In our new outfits we got boxes from the thrift store and boxed up our bike clothes and helmets and everything else except for our toothbrushes and soap and sent it all back home as Kaline doesn’t have much room in her car. We hope she will have room for me too if I don’t have a lot of stuff.
Then we got the cheapest room in town and headed out for the rodeo!!!
Wow! For us it was a phenomenal experience as we’d never been to one before!

Whatever you think of a rodeo, think again. It’s totally a family affair with kids as young as eight riding horses and roping calves. Girls too! Here’s a quick candid shot of one of my favorites.

Most of the families out here seem to have four kids and there’s lots of blue eyed blonds. When the rodeo announcer would call the name of the contestant and the town they were from, we often had ridden through the town.
I now know why there are all those beautiful horses I saw in the pastures.The rodeo was like a different culture in another country. There
are even college rodeo scholarships in this other country.
The cowboy fashion was fantastic. Big cowboy hats on the tiniest boys and all the girls in pearl covered snap button blouses, fantastic belts and embroidered boots; jeans with rhinestone stitched pockets. I wanted to photograph the crowd as much as I wanted to photograph the horses but doing either was hard due to the angle of the setting sun from where we were sitting in the red section (cheaper) stands. We were sitting next to 2 kids who were with both sets of grandparents.
Once or twice when the announcer would call a name and a town he’d say “well now, that fella must a changed zip codes because that family name belongs in such and such a town”
We saw the intense events (which is what the ambulance is on hand for) like the bucking horses and bulls. That stuff is about exciting as pure power gets and when those guys fall off it seems like just plain luck that they aren’t trampled. We saw one guy get a little trampled but he amazingly got up and wobbled off on his own.
There are less frightening events like roping cattle and running the horses around barrels (which was one of the events the little process in pink did) and best of all: trick riding.
An event Sarita and I laughed our heads off watching was the “chicken catchers” for kids five and under. They lined up all the kids and then they simultaneously let three chickens and all the kids (about thirty) go at once. The chickens ran and darted around and the kids fell all over each other trying to catch them which they eventually did but not easily. It was hysterical. 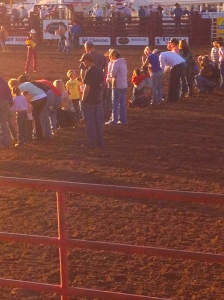 The tremendous belonging and success of family and community is profoundly felt out here. Even with the bus loads of Christian field trip kids, you get the sense that these kids have something to do and something that holds them in place.
I am not advocating organized religion or oppressive conservative politics or anything. I’m just saying I think people do benefit from belonging. Here in Evanston this morning we saw a parade of sorts. At first I thought it was an old car parade. 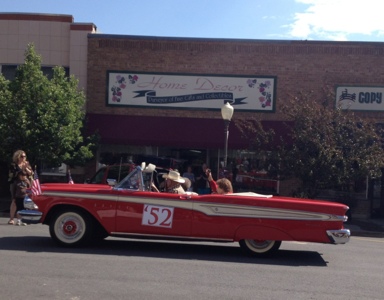 It was a parade of “Red Devils” the mascot for the high school and the cars were from all the graduating classes and there were a lot of people of all ages in the parade.
At the rodeo when we were locking the bikes they were playing the National Anthem and I thought, “oh no… I guess we’ll have to put our hands over our hearts or who knows what might happen”.
Looking up from locking the bikes I was amazed by the hugeness of the symbolism. Handsome young men and women on heroic horses prancing around with large Flags complete with a lady in the announcer’s box singing the lyrics in a forceful yet elegant voice. It surprised me so much it brought tears to my eyes.
If only I could understand and believe in this “freedom” these conservative politicians talk about. Is this  the right to kill Trevon Martin in Florida or what? What about the 500 times (or however many more than any other country) people we have in jail?? Is this freedom?
Well, it’s complicated I guess. Like this cafe where we have been hanging waiting for Kaline to pick us up.
The husband of the woman who runs the cafe is this guy

His brochure is written like someone running for a position in junior high school student government. He is running for senator of the state of Wyoming. Quoted here is the back of the tri-folded folder.
“Pro life. Pro family. Pro liberty.
Pro 1st amendment , 2nd, 3rd, 9th and 10th and some of the rest.” And the front; “Conscience, constitution and common sense”
The sign in his wife’s cafe however says this

I’ll take one of those too.