Well, as I was taking this photograph…

Just outside the restaurant where I was writing, this guy slides up

Enter River. How cool is he? He’s just (as in June) graduated from Cornell and has biked from Cornell (complete with tassel from graduation cap swinging from pannier) to the west coast and now down the west coast to Berkeley. Where did he go to high school? The infamous Berkeley High like my kids! Long story short, it was exit Derek enter River (his given name was Anthony). He tells me about this cool camp site and we agree to meet there that night and share costs before he goes into the restaurant for breakfast and I, tummy full, ride on.

After a mornings ride, just as I was taking this photo again River slides up. And I get the ding-dong doorbell sound of a text arriving. 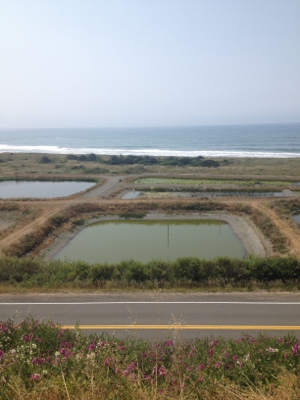 We are just outside of the seaside town Gold Beach and River asks if I’d like to lunch together and I say yes. He consults Yelp and decides that the port harbor cafe has about the amount we want to eat at the price we want to pay so we go there. It’s a great family place on the water. In there I remember the text and it’s Derek in the same town at Subway. I tell him where we are but I know he wants to do fast food as he is going for a hundred mile day to make it to Crescent City because he wants to get to California today. I feel no such urgency so we don’t connect.
After lunch, River and I again agree to meet at Harris Beach, Oregon state park just outside Brookings, OR. He goes on ahead and I bike along stopping now and then to photo. 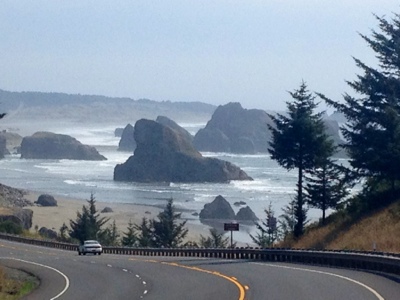 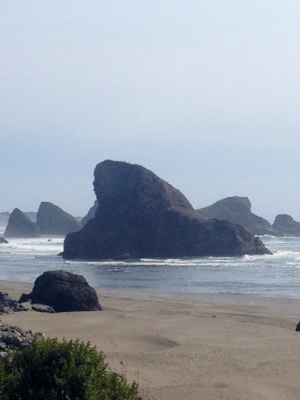 And here’s a photo of my best friend Silver 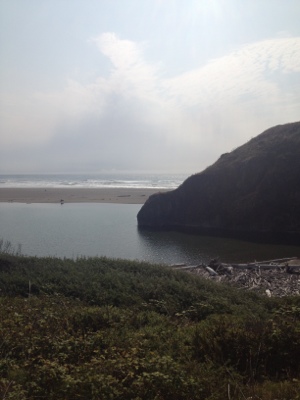 These next two photos were taken from the highest bridge in Oregon. 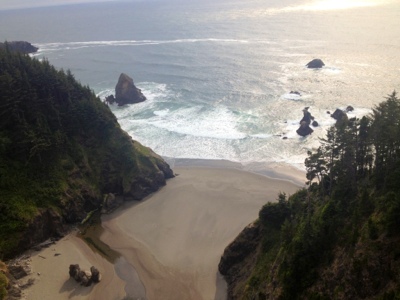 I made it to Harris Beach where I went to the

River in his extraordinary cool Yelpishness ordered a pizza to be delivered to our campsite!!! We shared it with this biker named Greg from Alaska. 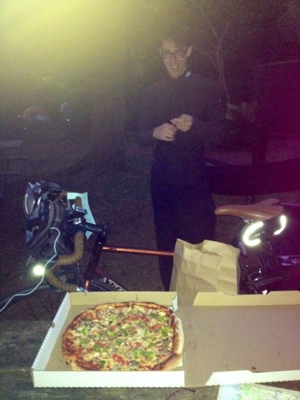 The whole biker camp was cool. There were thirty bikers there. Lots of us going alone but hooking up with each other. There was a lot of comparing gear, maps and touring strategies. It was fun. Lots of folks were going alone to SF.
Here’s a shot of packing up camp in the morning.