The reason we stopped ten miles short of Pt. O was because the KOA right next to the road had a “Hot Tub Here!” sign and that just sounded too good after these 75 mile days so we stopped.
Derek who is still with me most of the time, made a great fire with one match and that was nice after my hot tub. Also he suggested that I didn’t need to set up my tent each time i camp as there are no bugs here. I followed that suggestion which saved me a lot of time. 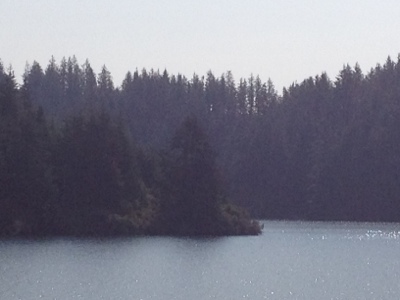 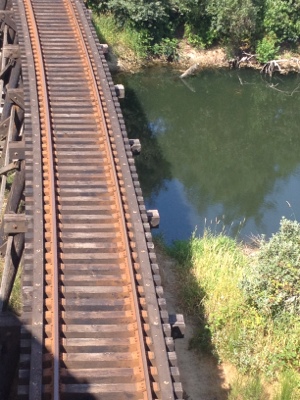 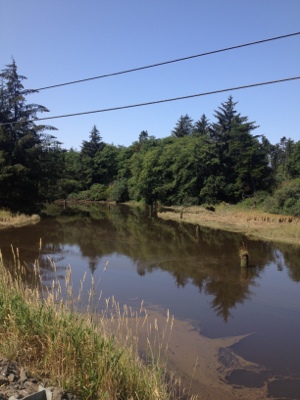 This part of the coast is forest until its ocean and sometimes it’s a little of both at once. There are also amazing stretches of sand dunes. 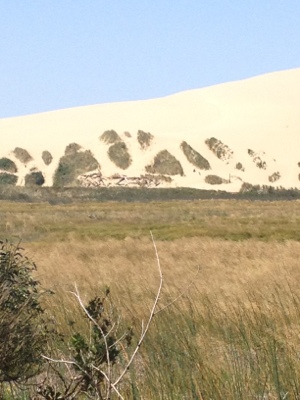 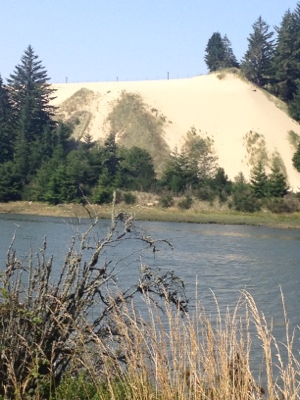 We pass through little towns with clever signs like, “Rock on in, Roll on out” at the Auto Lube place and “Curl up and Dye” at the beauty parlor but they must have taken it too far because the place was now vacant under the sign and for sale.
There are lots of bridges to go over, some scary with no shoulder, some big climbs, and some easy with wide shoulders. Here’s a picture of one in the distance. They are all fairly old with atmosphere. 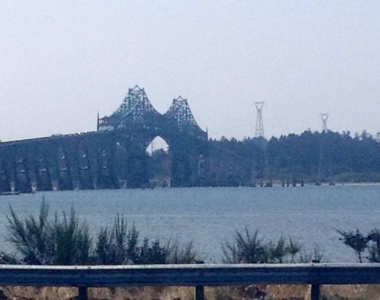 People have fun things in their yards. 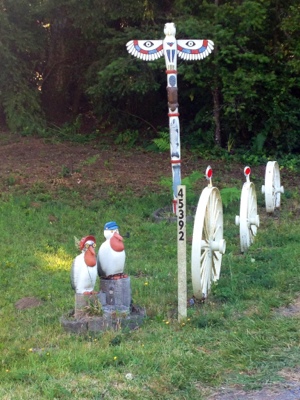 The toughest part of the ride was “Seven Devils Drive”. It was up and down and up and down and up and up and at first I thought the “devils” referred to the hills but there were more than seven. Then I started noticing the side road names like “Drunken Devils Drive” and “Stock Still Lane” and “Gin Run”. It was this backwoods scenic route jag on the ACA (American Cycling Association) map and the whole hilly ordeal I think could have been avoided but that’s the sort of thing you know afterwards.
The coast here is gorgeous. The mornings are sunny and the afternoons are ghostly with thick fog. The wind can get so furious that I fear for getting blown over the edge. Of course the wind can’t do that to me but it is so intense I feel like it could. 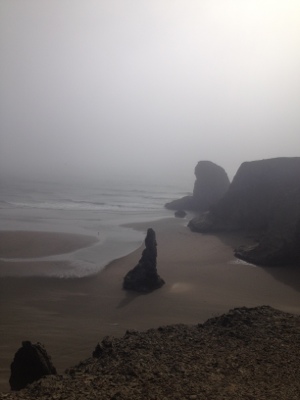 I have been writing this in a local homey restaurant with wood paneling, wifi and next to an outlet. Derek wakes up later than me and doesn’t eat a big breakfast. I thought he would have caught up with me here by now but he hasn’t so I’ll just carry on as my battery is at 100% and I’m done with yesterday.
California is 100 miles away.