We three left the hotel for the bike shop which opened at ten. Elijah needed a back brake cable. Derek needed a new intertwine as he’d given his to Elijah to fix his flat yesterday and I needed toe clips.
After a long heroic day of biking I have for the last time ended it by falling flat on my back from my bike simply because I couldn’t get out of my cleats in time. That really hurts and it is extremely embarrassing as well.
NO ONE we have seen touring is wearing clip in shoes which surprised me. Derek is wearing crocks! A woman we met on road named Katie is wearing sandals! And Elijah and the Brazilians (I’ll get to them later) are wearing fancy tennis shoes.
After the bike shop, we went to a fancy cafe in the old pricey part of Newpprt and had an absolutely perfect breakfast for not so much money. With full tummies and home backed cookies to go we set off towards 50 mile away Florence where Elijah needed to meet his friends. 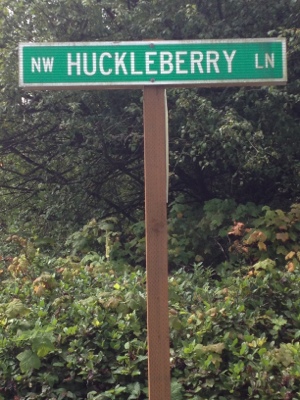 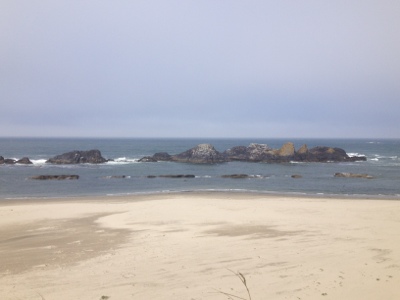 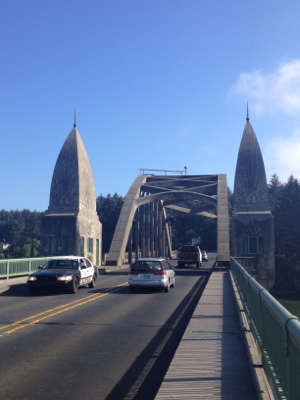 This last one had these cool cast glass pyramid things. I hope they light up at night.
These are big seals shot from one of these bridges. I know they look tiny here but the zoom is only so much on the phone camera. They were big seals.

Elijah was constantly setting up his tripod and photographing. 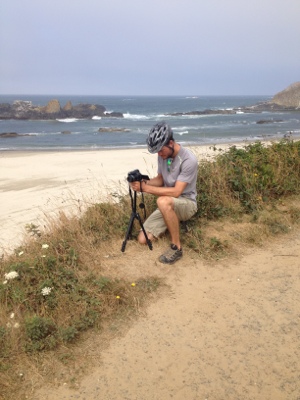 We were often looking down on things, either from the bridges or from high on the cliffs down to the beaches below. 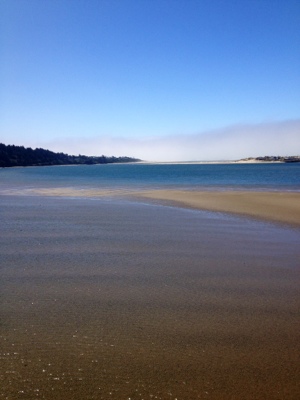 Admittedly all this is very beautiful but the most beautiful by far thing I experienced today was these two incredibly amazing Brazilian guys we met.

Granted they are good looking but that is nothing next to their spirits. They started biking in Buenos Aires Argentina!! And biked all the way up the atlantic coast of south America, entirely through the coast of Brazil and then at the mouth of the Amazon River they flew to Miami and from there biked to Chicago and from there they went to Seattle and they were planning to go to Alaska but their timing was off and it is too late in the season to bike in Alaska so they started down the pacific coast and are going all the way down and around to end up again in Argentina!

When we met them we asked them where they were going and with big smiles, they said “South”. There was such an appealing simplicity and lightness to them but there was nothing light about what they were carrying. There were loaded down with everything!

You can see in the photo the guitar and the Brazilian flag and the box with the drum inside it. It was simply not an option for them to travel without instruments because they said they have to play everyday. They also had full camp cooking gear and solar powered battery panels and even a plastic alien animal whose head bobs up and down as they pedal. At home they are music teachers and teach about ecology through music. They were hugely inspirational and it was an honor and a joy to encounter them and in a way a huge relief to see such bright vital energy on the planet and basically they were just having fun. Wow. What an example. You can see the little bobbing toy I hope in this next photo.

We carried on until Florence where the three of us had our final meal together in Elijah’s favorite Mexican place. 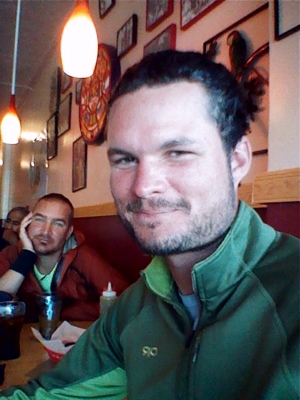 It was sad to leave him especially as it took me so long to find him but such is life. I hope to see him again one day and I’ll get it right from the start if I have the chance.
Derek and I continued on another 25 miles to Reedsport. I am trying to do 75 miles a day which will put me home in a week. 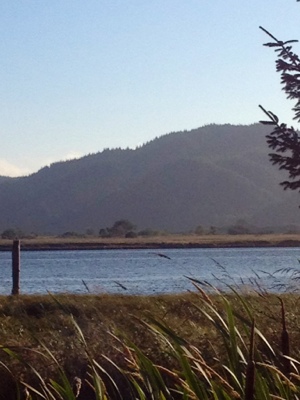 This is where I am for the night and these next three photos I shot coming back to tonight’s spot after my chocolate milk shake of a dinner.

Plus one extra shot I forgot to include. 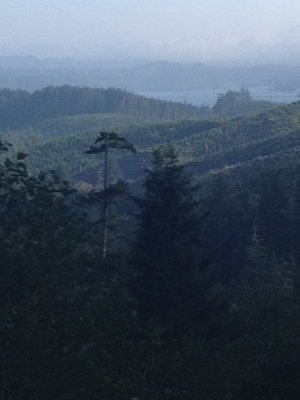 3 thoughts on “Newport to Reedsport”