I left my hotel room at eleven which is as late as i legally could. It was because of the electrical outlet and the WiFi.
I met an older man as I was leaving there who told me to take “The Avenue of the Giants” as an alternate route to 101. River who has been texting me tips and suggestions from further down the road told me the same thing. 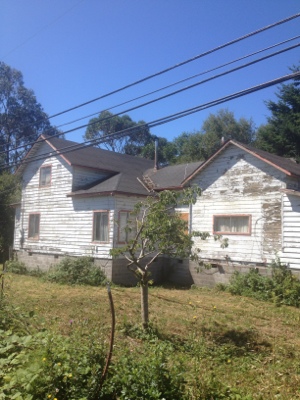 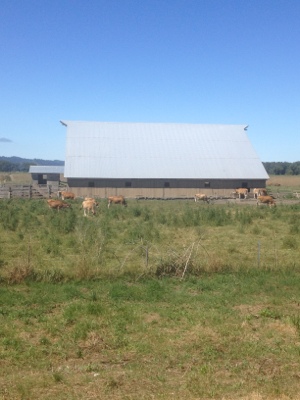 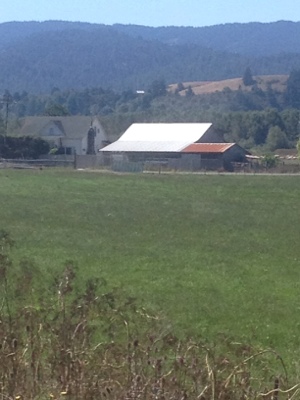 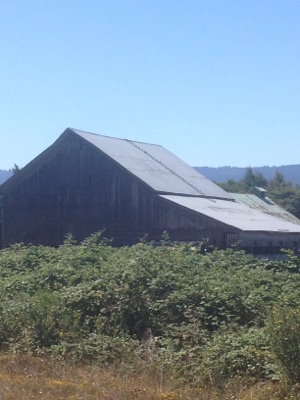 Before leaving town, I went to the bike store and got my chained cleaned and lubed (no charge, nice guy) and I got stronger sunscreen at Walgreens and a double shot latte at the Starbucks.

After that it was forty miles of beautiful scenery and small towns but no where for food so it was another day of trail mix and protein bars until six o’clock.

Avenue of the giants was pure magic. There is nothing like a 50,000 year old tree to keep your ego in line and your life in perspective. 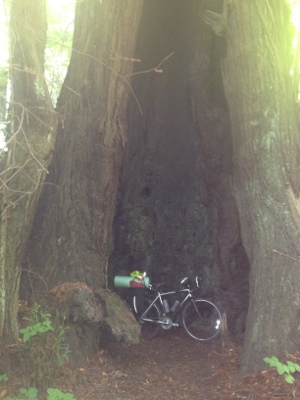 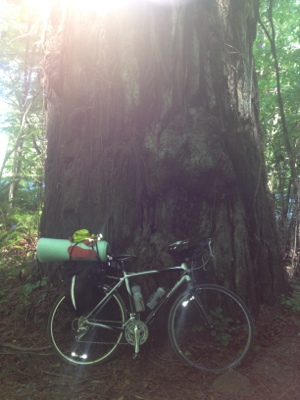 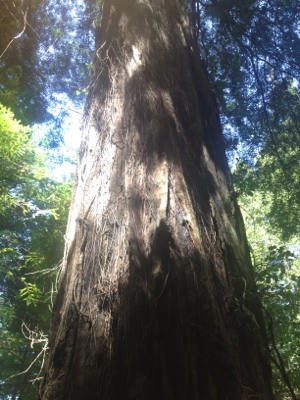 Very weird thing was, most of the photos I took in the Redwoods had a big blot of light in them, so most of the redwood photos look like this 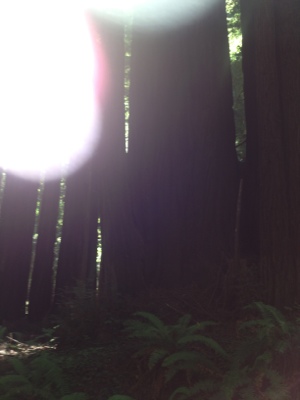 Also on the avenue, are wonderful little towns. Pepperwood with a population of fifty had two nice produce stands with vegetables from family yard gardens and a lady who made great bags out of animal food (horses and cattle and chickens) containers. Also it had a lovely bench. You see quite a few of these kind of benches in these parts. 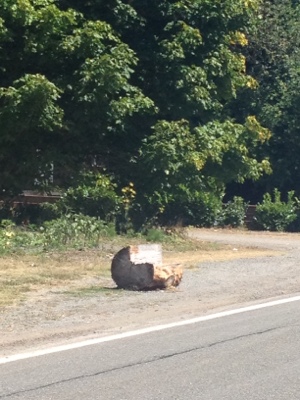 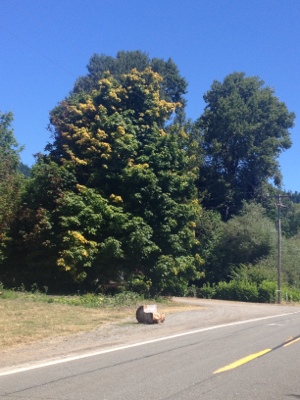 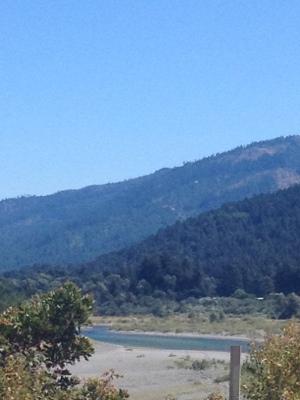 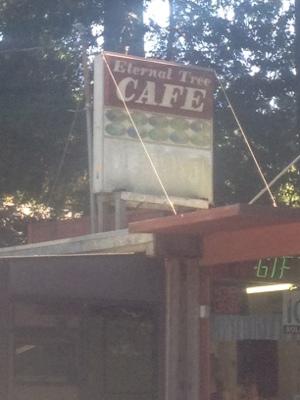 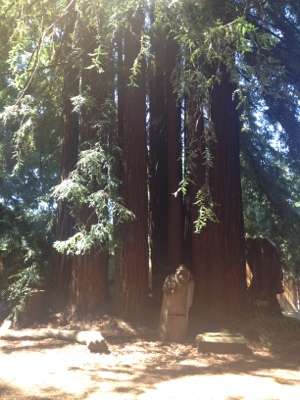 Also on this road are roadside attractions like little rooms and even tiny houses built inside ONE HUGE TREE long ago. It’s really quite magical mystical like in a kind of corny but real way. 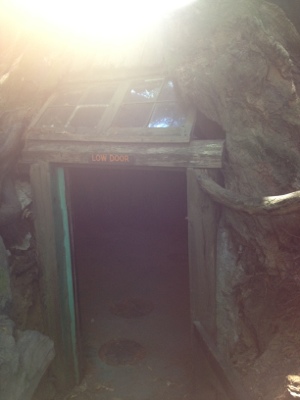 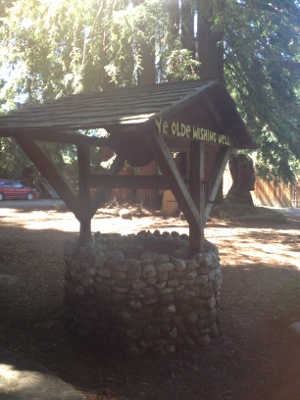 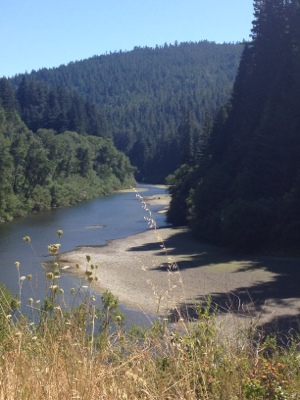 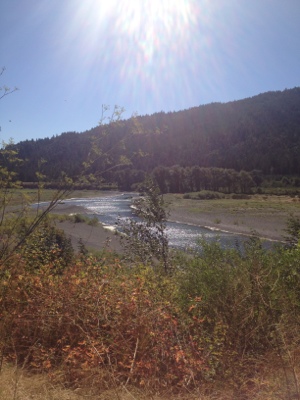 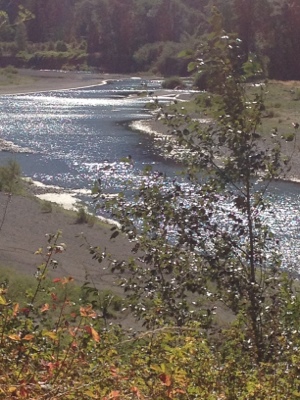 After a long day of riding I finally get to Garberville. I had heard about this town since the early 1980s when I had girlfriends who had girlfriends who grew Dope up there. It was sort of mythic in my mind and I was surprised to find it a two block town. It was however a very cool two blocks with Rastafarians and old hippies and cool youth. I had the best milk shake there I have ever had. 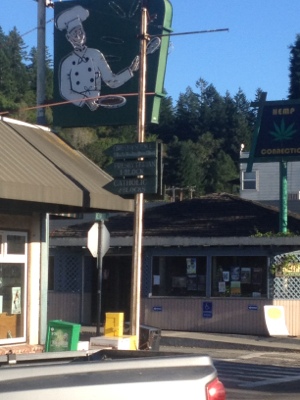 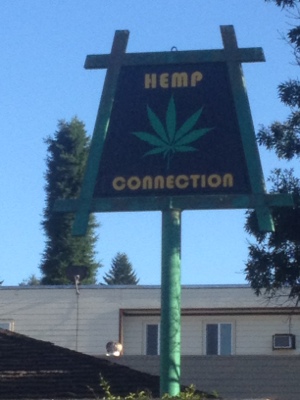 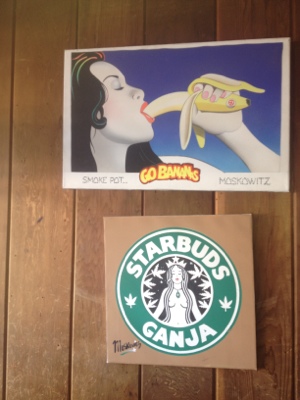 And my all time favorite 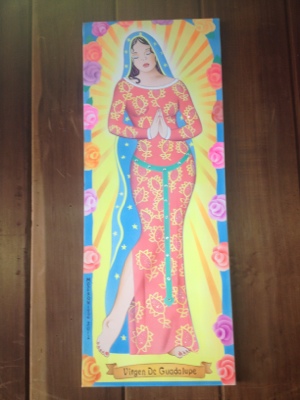 I traveled on with a salmon burger (so good) to go from Garberville and continued on the road to my state park. It got a bit scary because it was getting late (after seven) and foggy and I was hoping the Internet stuff I read was current as I passed a sign that said “save Richardson Grove Park”.
I made it there just before nightfall (that’s what I get for starting so late) and I finished the day at a hiker biker site in an old growth redwood grove. I was the only biker there!

I noticed when I paid my five bucks at the ranger entrance that the guy had colored pencils on the counter and asked him about that. His name was Thomas and he then proceeded toi show me every drawing in his sketch book and even left his station for a bit to go to his truck and show me his largest drawing which was on the back of park forms all scotch taped together. He had never taken an art course and simply drew what was in front of him. His stuff had a lot of atmosphere and he was nice to be around. He had a bit of what I’ll call tree presence. There was no hurry about him and his drawings took a lot of time.

I thought it was interesting how artists always seem to need their work to be seen by someone else and what would it be like if the act of just creating it was enough. ?

He (in his 20s) and I talked for so long that it was dark before I had my tent up and I never could find the showers.

The next morning when I tried to photo my site I had the same dust problem. 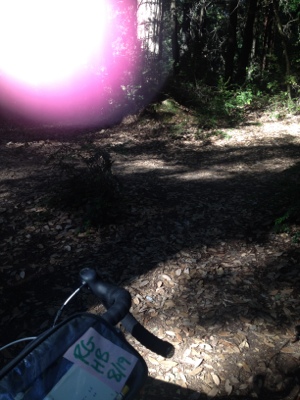