Alright then, I haven’t had Internet for a day or two so there’s a lot to remember and that’s what I will try to do.
Somehow I lost my lock between the bridge juncture and St. Helens which I realized when I stopped at the bookstore in St Helens so I went to the bike shop. It was run by an older couple who were very nice and pumped up my tires to the max as well. I wanted to keep my “Ride For a Reason” water bottle which I used throughout the last trip but my water started tasting like plastic so I switched it out for one of theirs.
By the morning I still hadn’t heard from Elijah so I didn’t go to Portland but back tracked the twenty miles towards the coast.
I again saw a lot of lumber which travels a lot on trucks but here it is on a train. Most often there are train tracks by the road and sometimes there is something on them. 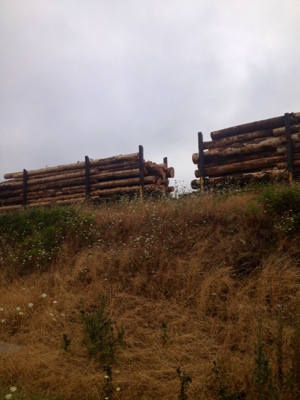 I had blackberries by the side of the road for breakfast. They were delicious.

Didn’t drink from the well but the image was nourishing enough.

I was feeling a little discouraged which one does at least a bit each day because it’s hard and you think to yourself “WHY am I doing this again?” especially when you are alone. I made it to Mt. Rainer for breakfast and the ladies’ room wall was covered with inspirational sayings.

That helped remind me.

The Oregon lottery is big. Some restaurants have fill in the number bubble sheets at the tables. They (and small grocery stores) will have a room in the back that you have to be 21 to enter. That’s where the machines are. The people going in and out of those don’t look so good. When a place has a room like this, it has a sign outside like this. 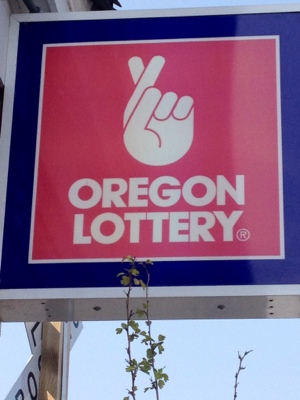 It was more beautiful and rural and the terrain was no longer flat but summit after summit with downhills in between. One downhill was 2.5 miles of a 6% grade. That was intense.
Climbing over a pass that has been well traveled. . .

Is often trees on both sides. Here are some shots of what’s in between the climbs. 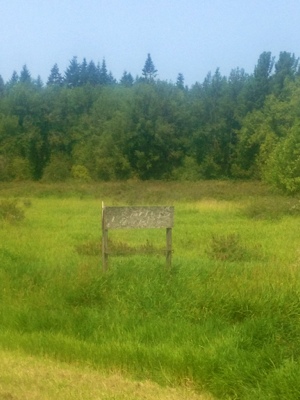 After 70 miles I made it to the coast.

Yippee! It felt like a real accomplishment!! Only trouble was that Astoria was packed with people for the Regata and ten miles south in Seaside it was packed due to a national volleyball tournament and a big sand castle competition and so on for the Oregon coast in the month of August. It’s like salt water taffy and tourists and no place to sleep unless you’ve planned far in advance. Ha! So I went on over the bridge to Warrenton

where I paid way too much for me for a hotel room and it was so full I couldn’t get Internet.
I did get a text finally from Elijah. He was in Portland and all bummed out and sort of mad at me for not hooking up with him! At first I couldn’t get it but then I saw it from his side and we texted back and forth and agreed to meet further down the coast in Lincoln City. It is 89 miles from Portland and 105 miles from where I was. We agreed to try to make it there by nightfall. I managed to book the LAST KOA RV site as there were no campsites left due to a golf tournament and other stuff going on there this weekend so it’s full.

2 thoughts on “St Helens to Warrenton”